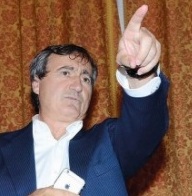 Fron an article by Ishaan Tharoor in the Washington Post of August 27, 2015:
Italy, a predominantly Roman Catholic country, is one of the few Western European nations that does not recognize gay marriage or homosexual civil partnerships. On the subject of Gay Pride parades, Venice’s mayor didn’t pull punches either. “It’s a buffoonery, as kitsch as it gets,” he said. This is a slightly amusing complaint, given Venice’s own past. The city, which was once the seat of a powerful Mediterranean empire, has a richly-documented history of supposed sexual deviance. In medieval Venice, as one historian notes, all sorts of places from schools of gymnastics to apothecary shops carried the stigma of gay gatherings.